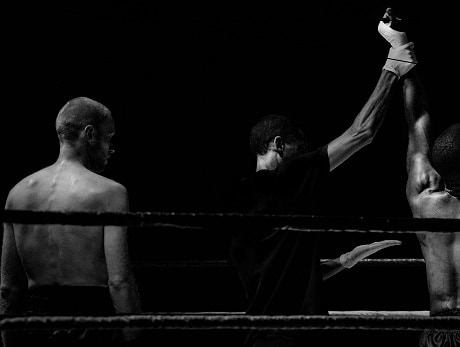 This is not my idea, I can only show you it happening.

Edmund Burke said, “All that is necessary for evil to triumph is for good men to do nothing.”

We all know the story of ‘the incident’ between Ben Shapiro and Bob-who-now-calls-himself-Zoe Tur on the Doctor Drew show. During the ‘discussion’ Ben called Bob-who-now-calls-himself-Zoe “Sir”, and he / she / it became righteously angry and grabbed Ben around the neck. Some of the other guests on the show immediately leapt to condemn Ben for his rude, outrageous, aggressively, insulting behaviour. The media of course responded as expected by supporting the real victim. No not the person who had been physically attacked but the person who had been told that their thinking they were a woman was scientifically wrong.

Ben went to press charges but the DA didn’t want to because “he didn’t feel like it was a winning case” because political correctness would mean “nothing would probably come of it.”

What does that mean? If the evidence is clear why would political correctness have prevented justice from being carried out?

I presume it means, that since there are many well funded, Leftist, organisations out there who would have worked together to defend Bob / Zoe for free and who would have no problem protesting the charge and claiming transgender discrimination, and creating the kind of uproar and outrage we should have seen over the sexual exploitation of children in Rotherham, that it would have been seen as more trouble than it was worth.

Which is their tactic. And you need a misdirecting tactic when you don’t have the facts on your side.

Conservative commentators are banned from campuses, police ask conservatives to leave protests when they have a right to stay because, even though that may not be correct under the law, if they don’t there will be a whirlwind of response from the Leftist machine whose weapons of destruction will now be targeted at them. Whereas those who have been banned will simply go home angry but not do anything substantial in response.

It’s like the teacher always giving attention to the most disruptive kid in the class. It’s not right, but what else are you supposed to do.

And what is the response from the conservative side.

Conservatives are good little children. They’re not going to make a fuss over something they should, even if their education is at stake.

I would like to know how many Lawyers and activist groups contacted Ben after the incident to offer all the financial and legal help they could and any support he needed. I’ll estimate none, shall I. But we all know that had the situation been reversed that’s exactly the kind of thing that would have happened. There would probably also have been a film somewhere along the line.

But no, Ben has to go down to the police station by himself, file the report by himself, and accept whatever decision the DA makes because there is no powerful organisation behind him to support his case.

I found an article that claims that the GOP sued Obama 46 times over eight years, whereas Trump has been sued 35 times in his first year alone! Other sources say he’s been sued more than 100 times in federal court since his inauguration.

The other side is working much harder than us. And whatever you say about them, however stupid you think they are, at least they’re doing something. And when I say doing something I mean doing something that actually helps. All we’re doing is giving pretty speeches and writing (admittedly witty) articles.

That’s why we will lose.

Unless we do something.

“All that is necessary for evil to triumph, said Burke, is for good men to do nothing; and most good men nowadays can be relied upon to do precisely that. Where a reputation for intolerance is more feared than a reputation for vice itself, all manner of evil may be expected to flourish.”